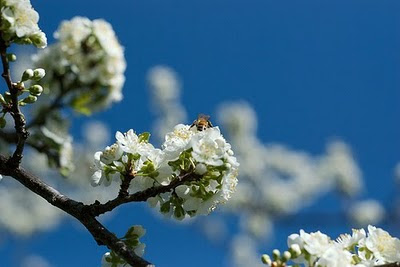 Our pear and cherry trees bloom, tulips color lawns, and dormant plants spring to attention. This burst of life reminds me of the first line of Chaucer's "Prologue to the Canterbury Tales":

When April with his showers sweet with fruit
The drought of March has pierced unto the root
And bathed each vein with liquor that has power
To generate therein and sire the flower....

That's from the modern English version. Chaucer wrote it in Middle English, which is still recognizable, but takes a little work to translate:

Whan that aprill with his shoures soote
The droghte of march hath perced to the roote,
And bathed every veyne in swich licour
Of which vertu engendred is the flour...

Take a minute and listen to it as the Middle English scrolls by:

See the Middle English and Modern version side by side here.

[Canterbury tales mural by Ezra Winter. North Reading Room, west wall, Library of Congress John Adams Building, Washington, D.C. According to the inscription, this mural shows (left to right): "The Miller, in the lead, piping the band out of Southwark; the Host of Tabard Inn; the Knight, followed by his son, the young Squire, on a white palfrey; a Yeoman; the Doctor of Physic; Chaucer, riding with his back to the observer, as he talks to the Lawyer; the Clerk of Oxenford, reading his beloved classics; the Manciple; the Sailor; the Prioress; the Nun; and three priests." (Source: John Y. Cole, On These Walls. Washington, D.C.: Library of Congress, 1995, p. 79)]

Which of Chaucer's tales do you remember? Which do you like best? How are the pilgrims' travels like your own?

Posted by Jane Heitman Healy at 9:49 AM