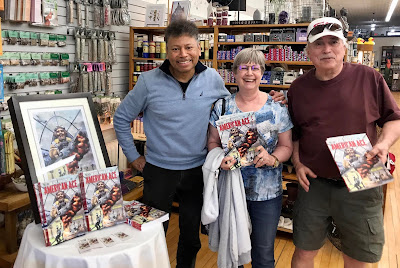 South Dakotans should know who Joe Foss is, but many people pass his statue at the Sioux Falls airport without recognizing him. The statue made Hector curious, so he researched to find out more. He discovered a story so compelling that he itched to tell it, and he set out to do so.

He went to the library, spending time in the special collections room where books by and about Foss were held. He scoured the internet and watched videos of his new hero. To Hector, Foss' story was so inspiring that he wanted to tell it in a way that would engage and inspire young people.

That was the beginning of his graphic biography for middle graders and up, which shows Foss' boyhood desire to fly become reality and tells how he became a World War II flying ace through hard work and determination. The story focuses on Foss’ time on Guadalcanal and its air battle. The impeccably detailed drawings work perfectly with the text to tell this hero’s story. Hector shows Foss' setbacks and mistakes and their consequences, which included learning from his mistakes. Hector presents the difficult facts of war, including dangerous conditions and the loss of Foss’ friends and fellow pilots. The graphic approach makes this biography exciting for young readers, who will immediately see the emotion and suspense of Foss’ life in and out of a plane cockpit. The story ends with Foss receiving his Congressional Medal of Honor from President Roosevelt. An epilogue gives an overview and summarizes the rest of Foss’ life. A bibliography gives the many sources Hector used to research. The url is given for the ones available online, including videos of Foss himself, which will aid readers in their own quest to know more about this famous South Dakotan, who went on to be Governor and the first Commissioner of the American Football League. 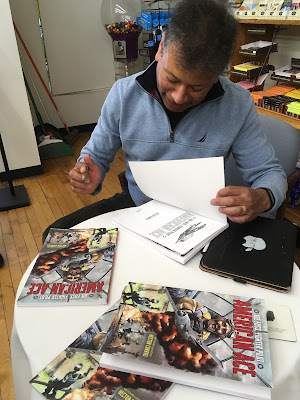 Hector's labor of love is a tribute to Foss and to South Dakota, his adopted home after emigrating from Peru. His training as an architect shows in his book's precise drawings. Hector is also known as a watercolor artist, a children's book illustrator, and art teacher to young people in a variety of settings.
Enjoy this SD Public Broadcasting interview by Lori Walsh:
Posted by Jane Heitman Healy at 11:30 AM 4 comments: