Finding Beauty, Giving Thanks, Serving Others 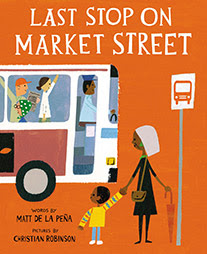 Last Stop on Market Street written by Matt de la Peña and illustrated by Christian Robinson is a lovely urban story about a boy who travels on the bus with his grandmother every Sunday after church. On the bus, CJ observes other riders and wishes out loud (aka "complains") to his grandmother.  In each case, she finds something beautiful and interesting in the situation, helping CJ--and us--see the world and people around us in a positive way. Nana demonstrates without preaching how--and why--to interact with strangers (keeping in mind all the stranger danger tips we know). The destination of the title's "last stop" is not given until the end (SPOILER ALERT), a soup kitchen.

This book is getting high praise from reviewers, including a nod for a possible Caldecott consideration. It resonates with me because of its themes. Our church participates in feeding the hungry at our city's Banquet. 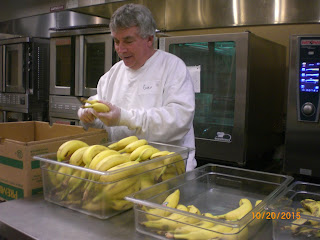 Why? "It's something you can do where you know you've made a difference," says our coordinator. Once a month, we serve breakfast at the downtown location and dinner at the Banquet West location.

When CJ asks Nana why they serve at the soup kitchen, she reminds him that they get to know some interesting people. We have discovered that to be true, too. No breakfast is complete until we've heard a new joke from Ray.

We have learned that most of the people who come to the Banquet are employed but may have to choose between paying rent and buying food. Some come because they are unable to work because of illness or injury. Some come for a warm meal and companionship in an otherwise lonely world. If you live in our area and want to join us, contact me for info. If you don't live in our area, consider helping out at a feeding ministry in your town.

Posted by Jane Heitman Healy at 8:47 AM 2 comments: 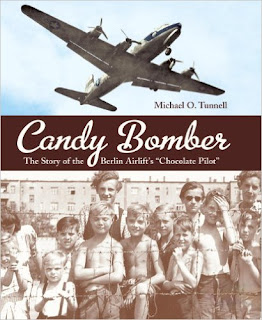 On November 11, 2015, the United States observes Veterans Day to honor those who have served their country in the US military. Ceremonies, parades, reunions, and reminiscences will take place. Service in battles will be recalled, and while that is certainly of utmost importance, I'd like to draw attention to other important work of United States soldiers--that of humanitarian aid.

The children's book Candy Bomber tells the true story of US Air Force Lieutenant Gail Halvorsen and other troops and citizens during the Berlin Airlift. Michael O. Tunnell's  book is aimed at fourth-sixth graders, but adults would appreciate it and its many photos from those times. (Thank you, Linda Baie at TeacherDance for pointing this book out to me!)

Lt. Halvorsen became known to the children of West Berlin as "Uncle Wiggly Wings," or "Uncle Chocolate" after he saw destitute children who needed a sweet boost. In addition to air drops of food and other supplies, Lt. Halvorsen and others dropped parachutes containing candy. He'd "wiggle" his aircraft wings to let the children know it was him, and they would eagerly rush for the falling parachutes. Lt. Halvorsen became famous for his efforts, but it was not fame he sought. He merely wanted to help others, bringing them hope. See more at his website, and take time to hear Lt. Halvorsen tell about his mission:

The US military continues to provide humanitarian aid around the world. Here are just a few illustrations: 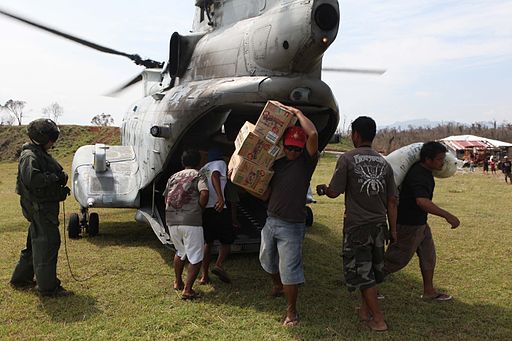 (By U.S. Marine Corps photo by Cpl. Bobbie A. Curtis [Public domain], via Wikimedia Commons)
US Marines handing out supplies in Haiti, January 2010

Thank you for your service, veterans.