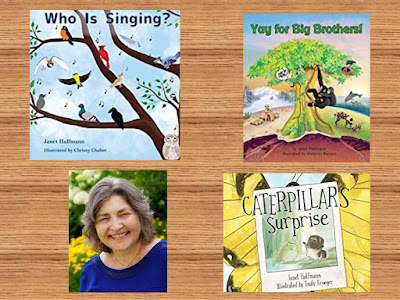 Janet Halfmann knows how to write a good children's story and add in some fun facts, too. She's had a big year promoting three new picture books! If you have young people in your life, you will want to consider these. 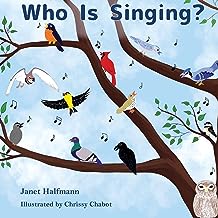 Who Is Singing? written by Janet Halfmann and illustrated by Chrissy Chabot was released in July by Pen It! Publications. When I open the door in the morning, I love to hear the birds sing. I can identify some of their songs, but not all. Janet has "translated" the bird songs into words or syllables, asking with each one, "Who is singing?" The answers begin with, "Take a bow" and identify the bird. Robins, cardinals, blue jays, chickadees, and other common birds are featured. Readers and their young audiences will have fun imitating the various bird sounds, and maybe making up their own bird calls. Kids' nature walks will have more meaning when they can recognize the sounds they hear. Chabot's simple, colorful illustrations also help with bird recognition. The last page of the book includes fun facts and a suggested activity. 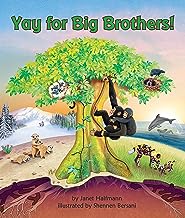 Yay for Big Brothers! by Janet Halfmann and illustrated by Shennen Bersani was published by Arbordale Publishing in November. This book is perfect for a family that includes a big brother, but also works for big sisters and animal lovers, too. Big brothers are often heroes to their younger siblings, and Janet and Shennen show that the same is true in the animal kingdom. Readers will see how animal big brothers near and far--African wild dogs, beavers, chimpanzees, crows, dolphins, hoary
marmots, kangaroos, meerkats, naked mole rats, tamarins, and wolves--help their families. For example, Big Brother Crow helps feed his younger siblings. Big Brother Tamarin carries his younger siblings through the trees. Shennen's expertise in science illustration for young people gives accurate illustrations of each animal family. Each spread asks a question relating readers to the topic. For example, for the tamarinds, the question is "How does your little one get around?" "For Creative Minds" at the end of the book includes a glossary and interesting facts, and more facts and activities are found on the publisher's website. This book gives readers and their young audiences a chance to learn and marvel at nature together! 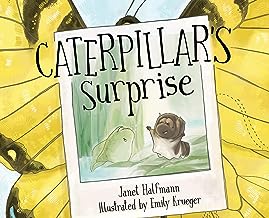 Caterpillar's Surprise by Janet Halfmann and illustrated by Emily Krueger will be released by Black Rose Writing in early December. Gentle humor, embedded poems, characters to root for, and a compelling story centered around an animal masquerade ball make this tale a winner. Emily's detailed illustrations set the scene and show creatures' emotions and transformations. What a fun way to see the different stages of animal development and the value of friendship!
I received a free digital copy of each of these books in exchange for an honest review.
Posted by Jane Heitman Healy at 9:55 PM 2 comments: