Celebrate! Poem in Your Pocket Day, National Poetry Month, or Anything at All! 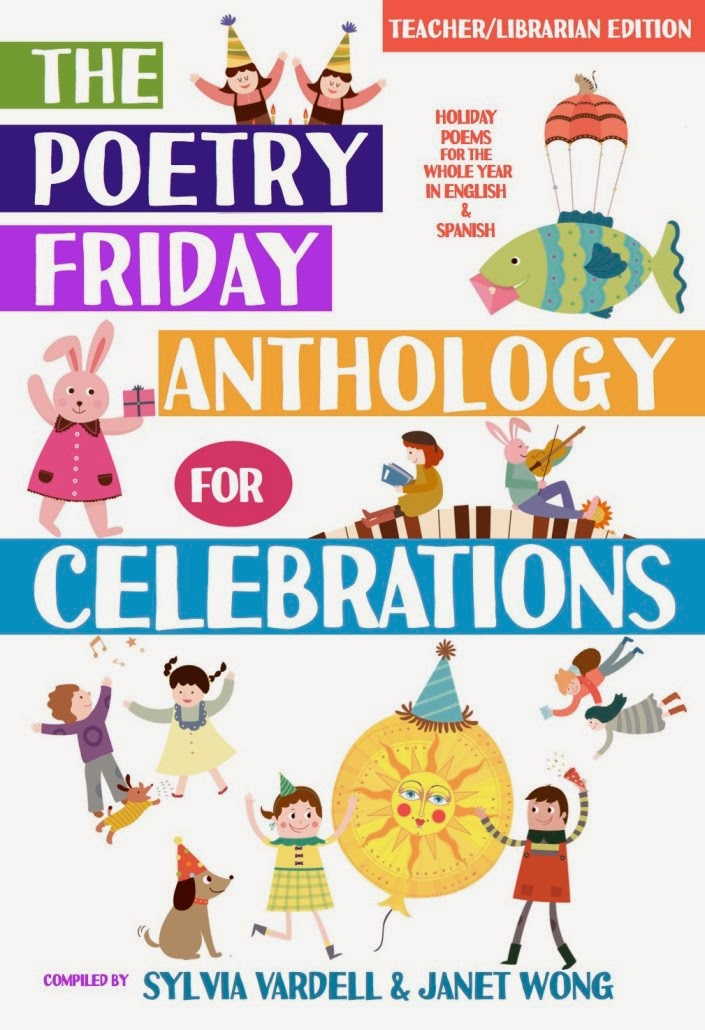 If you look, you can always find something to celebrate. I thought I'd wrap up National Poetry Month by featuring the brand-new Poetry Friday Anthology for Celebrations, compiled by Sylvia Vardell & Janet Wong, published by Pomelo Books.

It contains 156 poems for holidays throughout the year by children's poets you've heard of, such as Kenn Nesbitt, Eric Ode, Jane Yolen, David L. Harrison, J. Patrick Lewis, Nikki Grimes, Joyce Sidman, Laura Purdie Salas, and many others! It also includes poems by some not-so-well known poets, including me! I'm thrilled to be in this amazing company!

And here is my celebration poem for International Friendship Day: 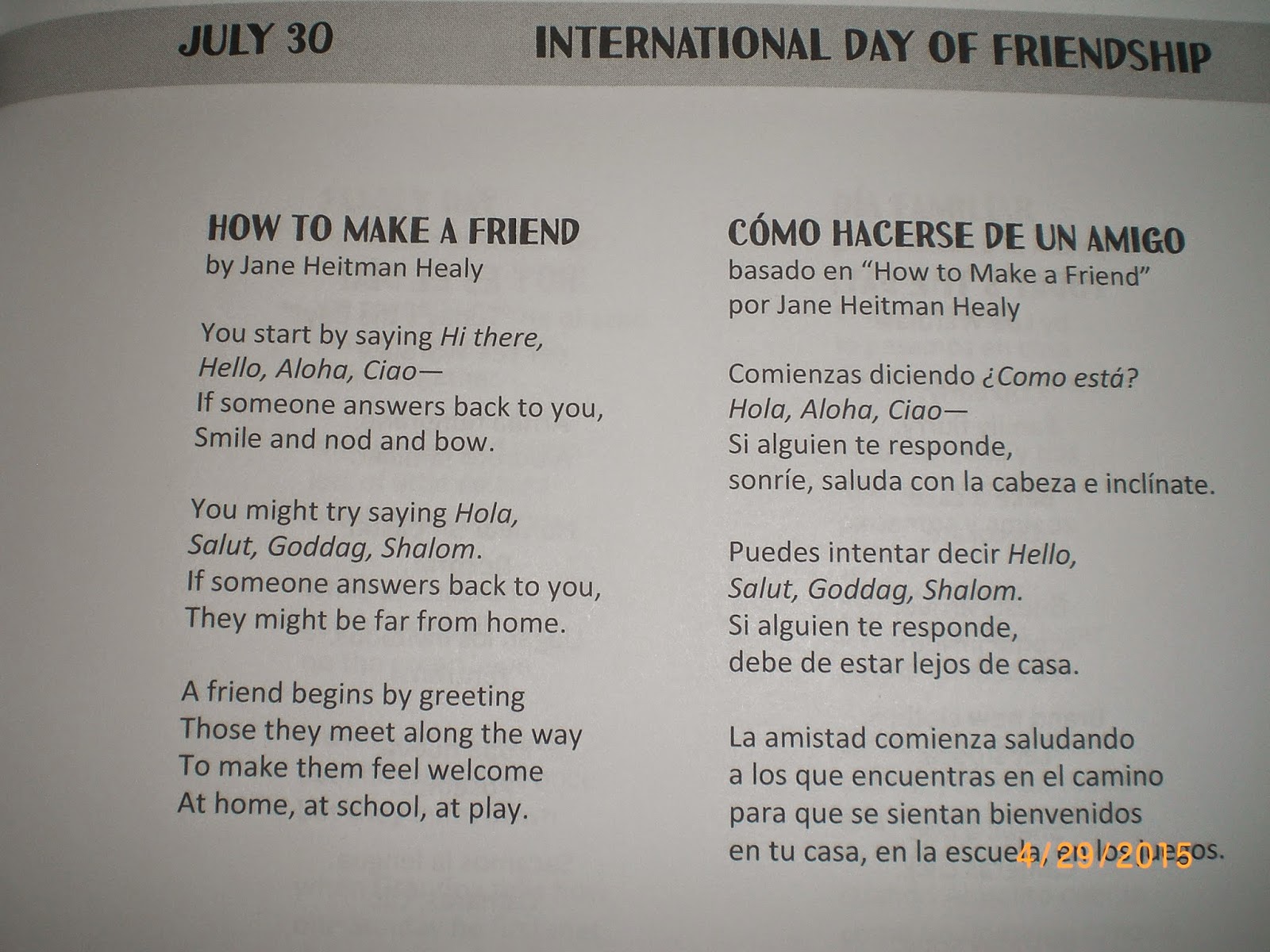 Pomelo published a student edition (shown) with poems in English and Spanish and a teacher/librarian version that includes activities, literature connections, standards alignment, and tips for teaching and using poetry with children.

Continue the year 'round celebrating with the following book of poetry and artwork representing the four seasons. 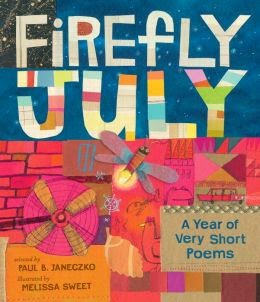 The poems were selected by Paul B. Janeczko, who was featured in my previous blog post. Poems include old and new, familiar and unfamiliar, by poets such as Carl Sandburg, William Carlos Williams, Ted Kooser, and Alice Schertle. In keeping with the book's subtitle, the poems are indeed very short. Melissa Sweet's mixed media illustrations add to the festivities.

Finally, we close National Poetry Month with Poem in Your Pocket Day on April 30. What poem is in your pocket? What poem would you give others for their pockets?

Keep a poem in your pocket and celebrate, because every day is precious.

A History of Poetry in 50 Objects: Happy National Poetry Month 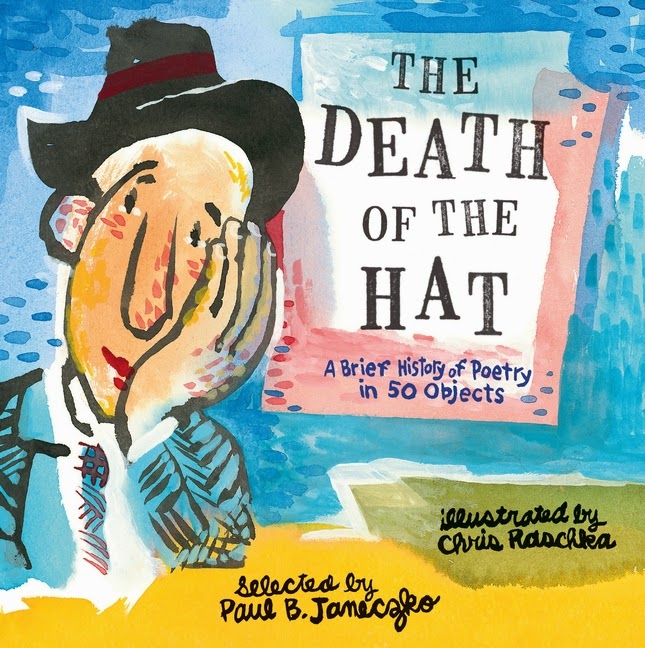 How has language changed through time? How have human lives changed, as we've greeted new inventions and deemed others obsolete? And how could those concepts be shown in a picture book poetry collection?

Only Paul Janeczko would tackle such a project so successfully! For The Death of the Hat, Janeczko chose 50 poems from the Early Middle Ages to the present. His introduction briefly explains society and language in each time period, which makes this book a great companion to history and language classes. You'll find some favorites here, as well as poems you may never have seen before. For more on how and why Janeczko chose these poems, see this interview from Kirkus.

Thanks to Chris Raschka's artwork, even the old favorites feel new, as he puts his fresh interpretation on the pages.

Though published and cataloged in libraries as a book for children, all ages will find this book a delight.

Janeczko tells us in the introduction that he has more than 1,500 poetry books, which makes me feel not so odd, after all. I have a lot, but not that many! Here are some of mine. Do you recognize any? What do your poetry shelves look like? 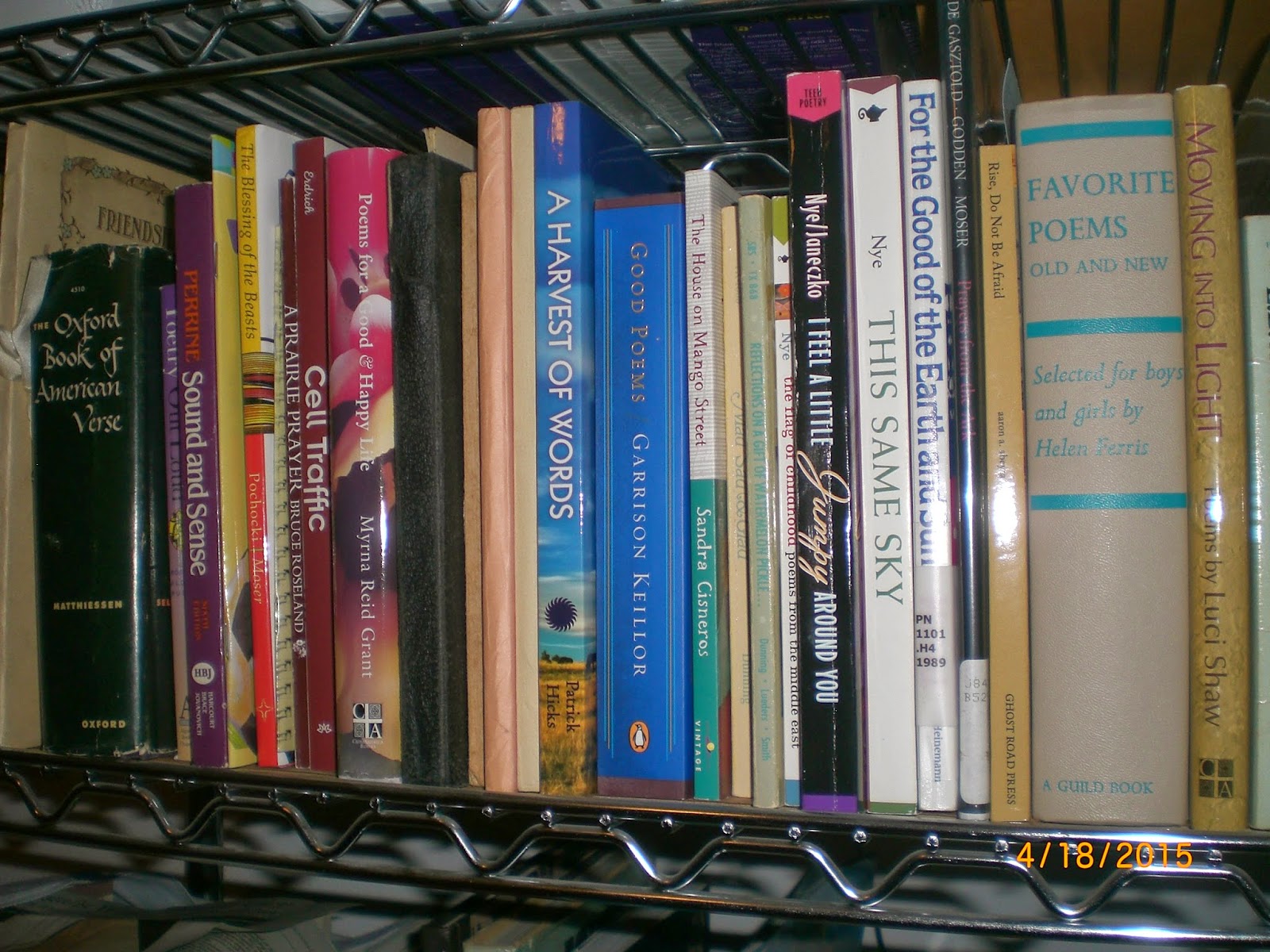 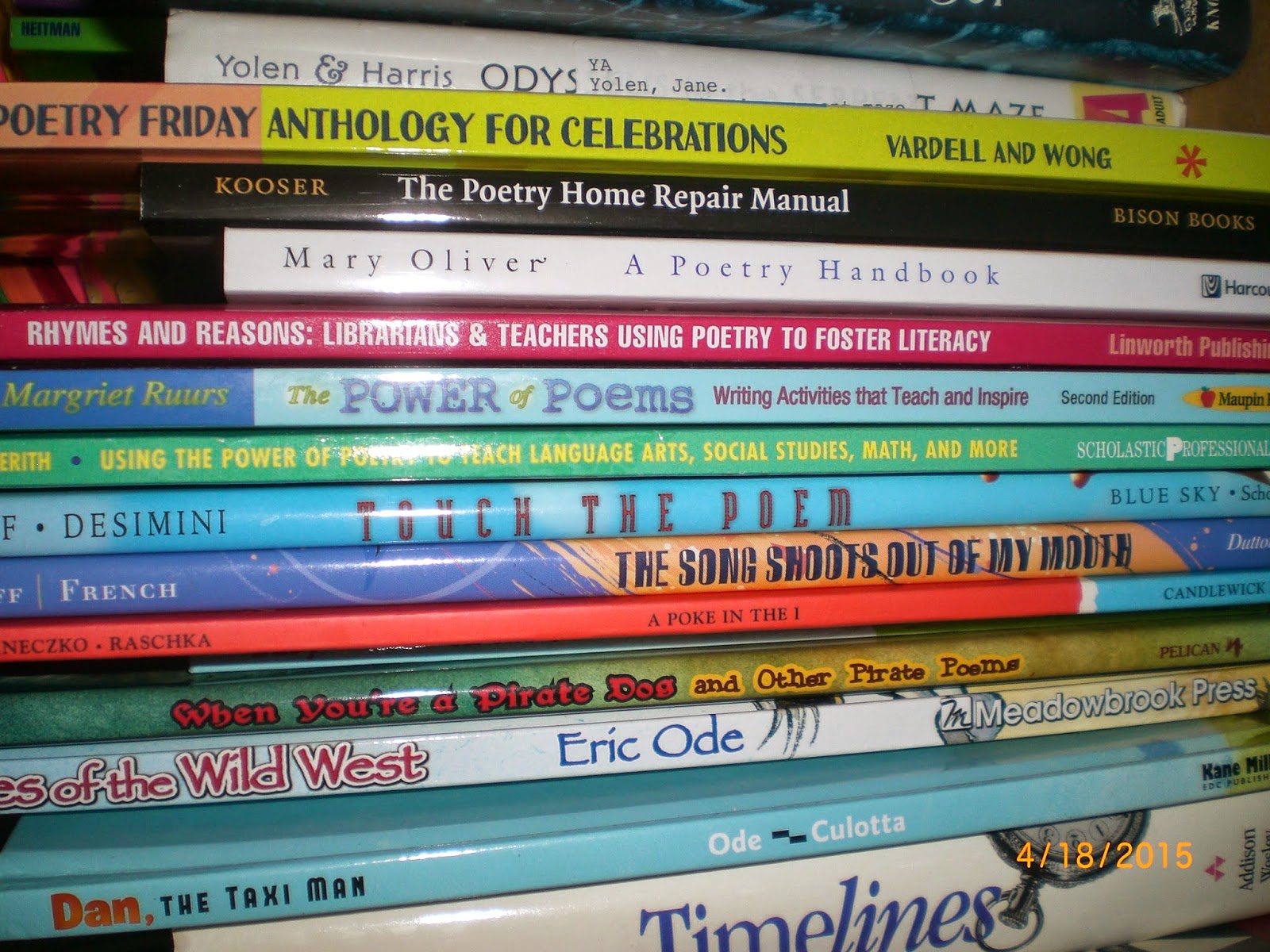 Posted by Jane Heitman Healy at 1:18 PM No comments: 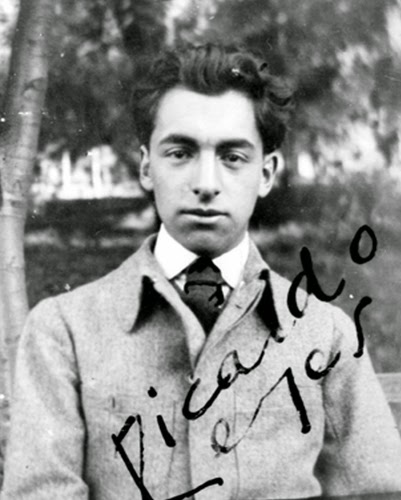 “It was at that age
that poetry came in search of me.”
― Pablo Neruda, Twenty Love Poems and a Song of Despair

Poetry found Pablo Neruda, born Neftali Ricardo Reyes Basoalto, at an early age--an age where his father opposed Neftali's poetry writing and politics, but Neftali published his first poems as a teenager under his real name. To escape his father's disapproval, by the time he was 20, he wrote under the name for which he gained universal fame--"the greatest poet of the 20th century in any language," according to novelist Gabriel Garcia Marquez.

Not only was he wildly popular as a poet, he became a diplomat and ambassador for his native country, Chile. 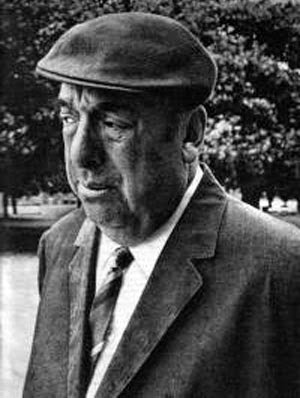 Here are some of his well-known lines:

“Then love knew it was called love.
And when I lifted my eyes to your name,
suddenly your heart showed me my way”

“To feel the love of people whom we love is a fire that feeds our life.”

“And one by one the nights between our separated cities are joined to the night that unites us."

“Laughter is the language of the soul.”

“Love is the mystery of water and a star.” 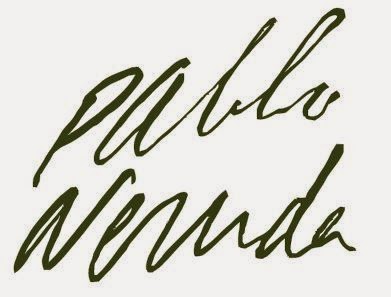 Pam Muñoz Ryan's fictional biography of Neruda's boyhood and coming of age shows young readers how Neruda overcame his father's opposition and followed his dream. Written in heartfelt poetic prose, The Dreamer, illustrated by Peter Sís, encourages young people to be who they are and use the talents they are given.

The back matter explains fact and fiction and includes some of Neruda's poetry.

And finally, a caution:

Advice to a Young Woman with Bad Judgment in Men

And its cruelty and heartache and cheating,
Its pain, sure to last evermore.
With such a great love in your life, girl,
Why wouldn’t you show him the door?

He wooed you with promises plenty,
“Red wine for red lips,” so he said.
Not quite the Khayyam--still you bought it--
The words going straight to your head.

Now Nazareth, Joan Jett, and Petty
Sing love’s truer tale to you.
Watch out for poets, my darlin’,
Or they’ll get the better of you.