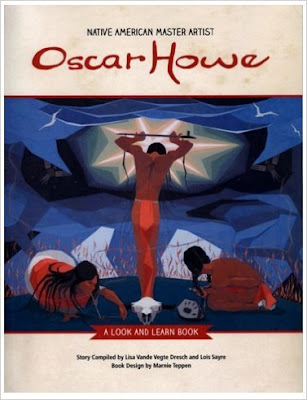 This weekend marks a holiday known in some places as "Columbus Day," but from 1990 forward, in my state it is called "Native American Day." Since 2015 is the 100th birthday of South Dakota artist Oscar Howe, we have been celebrating him with a special exhibit of his work at the Washington Pavilion and a new book.

The Pavilion exhibit displayed works that spanned Howe's lifetime. The accompanying text explained Howe's groundbreaking importance. When his entries for an exhibition were rejected, he fired off a letter that shows his determination and individuality. See the text here. He would not be boxed into a style other than his own.

The Pavilion exhibit held special interest for us because a friend told us about how her family came to have an Oscar Howe original. Her father was then president of Dakota Weslyan College. Her parents did a lot of entertaining, with Howe sometimes among the guests. Her mother asked for a painting, and the next time he came to the house, he brought one with him. We were delighted to see the painting in this exhibit!

The book, Native American Master Artist: Oscar Howe, was written by teachers Lisa Vande Vegte Dresch and Lois Sayre, who admired his work and the personal traits that led to his success. Though written for children, adults can also learn more about Howe's life, personality, and artistry. Designed by Marnie Teppen, the book contains many of his works, beautifully reproduced and true to the original color--not something all printers can do successfully. The book also includes information about the Dakota people and photographs of Howe. For more about the book, see the FaceBook page.

Howe's work is still displayed in many places, including public buildings. Ten of his murals, done as WPA work in the 1940's, are displayed in the Scherr-Howe Arena in Mobridge. Here's a photo I took of the dome he painted in the Carnegie Research Center, Mitchell. The photo does not begin to capture the size, color, or design of the whole. 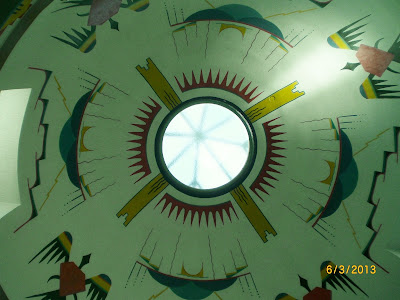 More of Howe's work can be seen here and in person at the University of South Dakota in Vermillion, as well as other art galleries and museums.

His legacy lives on as his work and teaching continues to influence artists and art lovers.

I'll close with the question posed on page 37 of the book, "If you could meet Oscar Howe, what would you ask him?"