Time Keeps on Slippin' Into the Future

It's been awhile since I posted, what with work, family, holidays, and all. What I've been told is true--time goes faster the older I get. As a measurement, each minute is the same length. But as we experience it, some minutes drag on for hours, while others are a mere blip. 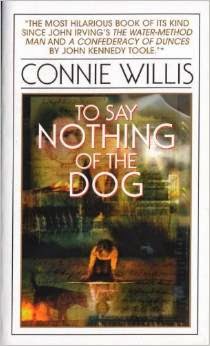 The time-space continuum has interested and puzzled people for ages, and the idea of time travel captures our imaginations. Award-winning author Connie Willis has written several time travel novels, including the one I just read, To Say Nothing of the Dog. This delightful romantic romp was first published in 1997 and won the Hugo and Locus awards in 1999. It was nominated for the Nebulae Awards in 1998.

The characters go back and forth from England in 2057 to Oxford in Victorian times to WWII Coventry during the bombing. The main characters, Ned Henry, an intelligent bumbler trying to do the right thing--whatever that is in his current time period--and Verity Kindle, a smart beauty also trying to do the right thing, also prod the reader to consider the impact of an individual on history and what difference small incidents can make on the future. What if Terence had not met his intended? What if Princess Arjumand had drowned? What if Ned and Terence had not pulled Professor Peddick out of the river? Though we are assured that the time space continuum repairs problems so that things turn out the way they should, sometimes it takes years.

What if we fail to smile at the person we meet, hold open a door, make a call, or give a helping hand where we can? We can't rewrite history, but we may be able to make the present--and the future--a better place. Happy New Year!

In the meantime, Steve Miller is right, "time keeps on slippin' into the future..."