After Dark: Poems about Nocturnal Animals Blog Tour Stop #3 AND A GIVEAWAY!

***UPDATE***
WINNER OF AFTER DARK ANNOUNCED
SUSAN HUTCHENS!
CONGRATS, SUEsan!
I'll be in touch about address. 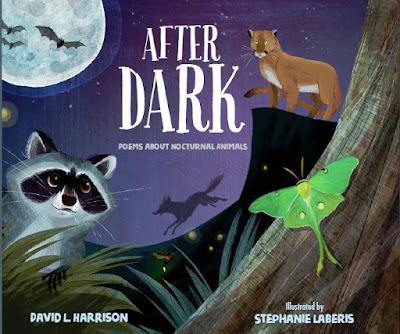 I'm so excited to share the news of David L. Harrison's newest book, After Dark: Poems about Nocturnal Animals, releasing on 2/25! (You can order it now here or from your favorite book seller.) And excited to be the third stop on the After Dark blog tour! Toot! Toot!

David is a well-established, award-winning writer and poet for children and educators, so it's no surprise that After Dark is receiving great reviews from the likes of Kirkus and Publisher's Weekly.

Yes, it's a picture book, but this is truly one for all ages, and one that kids can grow with. Young children will appreciate and learn from Stephanie Laberis' vivid illustrations depicting scenes from the poems, each set against the dark of night. A great example is the ominous illustration for "A Night's Work (Deer Mouse)" which emphasizes the mouse's need to beware of predators. 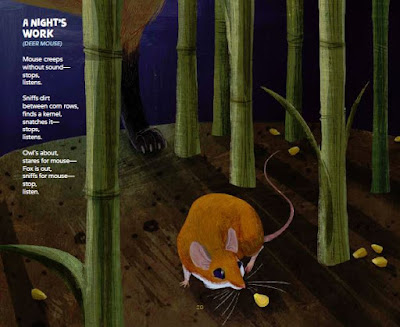 As children wonder more about the world outside, After Dark will answer their questions about what goes on while they are asleep. The 22 poems draw the readers into a scene with each animal, and fact pages in the back give extra information in easy-to-read bullet points.

Something I love about this book is that its poems feature creatures from a variety of environments, so that readers can learn more about animals that live where they do and learn about animals that are alien to them. My granddaughters readily identified the cougar, noting that we call them mountain lions. The armadillo is something they have only seen in pictures.

David gave his poems tantalizing titles, often using word play, to pique readers' interest. For example, "Don't Let Him Needle You" for the porcupine and "Armored Night Knight" for the armadillo. His poems' vocabulary stretches young readers. An example is his use of the word "pilfer" rather than the simpler "rob" in "No Fooling (Raccoon)": "Know how to pilfer, when to climb,/an escape artist, one of a kind." Readers can understand "pilfer" by using context clues from previous lines: "Light-fingered nighttime thief,/dines in style on what you leave" and interpreting the illustration. 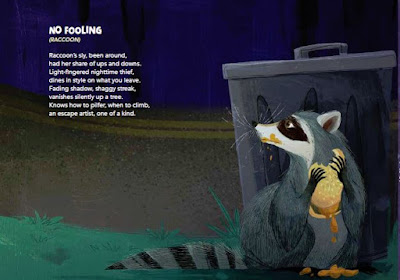 I asked David about his sense of word choice, and here's what he said, "I can’t say I have a set rule or system. Word choice is probably a combination of experience, sense of fit, concern about my reader’s vocabulary, goal of keeping my language fresh, and occasionally choosing between the familiar and a stronger alternative that is more or less defined within the text. Sometimes I feel confident that even if my word choice isn’t in my reader’s reading vocabulary it’s probably in his speaking vocabulary, which should help him decode the word in print."

Each poem takes the form it needs to tell its story. Some poems rhyme and some are free verse. I enjoy David's poetic language and the observations he makes about each animal. For example, from "Mouth of Doom (Flathead Catfish)": By night--/silent submarine,/solitary stalker...." 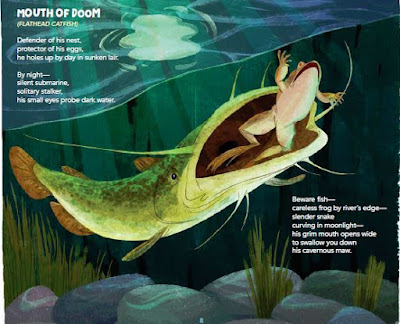 David began his studies and adult career in biology. You may not think that science and poetry have much in common, but in fact, both require keen observation and the ability to describe what one observes. David said that the kernel for this book started when he was 6 years old camping with his parents, and it has finally come to fruition. In this, David's 97th book (!), he combines his love of nature and his mastery of poetry into a book that all ages can enjoy and learn from. 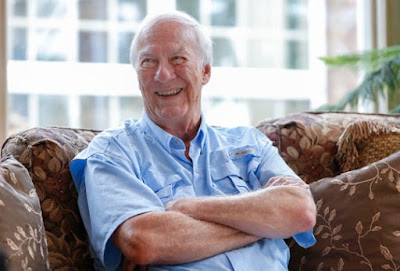 David L. Harrison’s books for children and teachers have received dozens of honors, including Society of Midland Authors award for best children’s nonfiction book, 2016; Missouri Pioneer in Education Award; and Missouri Library Association’s Literacy Award. His work has been widely translated and anthologized more than 185 times. His poems have been set to music and sandblasted into a library sidewalk. He has been featured at hundreds of conferences, workshops, literature festivals, schools, and colleges. David holds two science degrees and two honorary doctorates of letters. He’s Drury University’s poet laureate. David Harrison Elementary School is named for him.

He also encourages other poets of all ages and sponsors the Word Of the Month poem on his website. I've played there for many years, sometimes with greater success than others, but always with interest in seeing how other writers treat the word. (This month's word is AGE if you want to play along.)

GIVEAWAY INSTRUCTIONS--Yes, you want this book! And wouldn't it be fun to WIN it? Thanks to WordSong for making this giveaway possible. To enter, please leave a comment on this blog post by midnight CST on Friday, February 21, and a way to contact you if you win (email, FB, twitter handle). Available to those living in the US only. And spread the good news about this book in your own networks!

Catch a ride on the After Dark Blog Tour train! Next stop, Poetry for Children! All aboard! 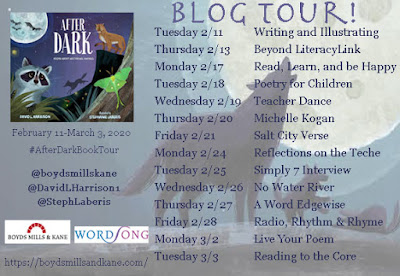 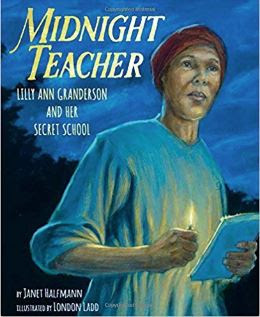 In Midnight Teacher: Lilly Ann Granderson and her Secret School, author Janet Halfmann tells Granderson's story in this picture book biography from the time Lilly was an enslaved child working in the master's house. She played school with the master's children when adults were not watching. She knew that she needed to hide her learning, but her desire to learn was unquenchable. Illustrations by London Ladd show Lilly teaching reading and writing to other enslaved children. Soon people of all ages attended her lessons. All of them knew the risks they faced if caught, but they continued. Lilly's students went on to teach others, creating a ripple of education. Halfmann makes clear the difficulties and risks Lilly took to create a good life for her family and help others learn. The difference between being enslaved and free before, during, and after the Civil War is stated directly. The Afterword fills in the historical record, and selected references show readers Halfmann's scholarship and places where they can find more information. 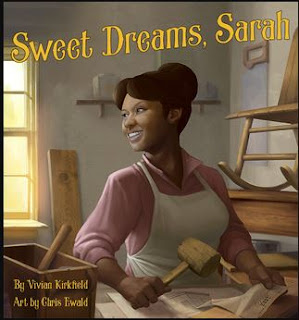 Vivian Kirkfield's picture book biography of Sarah E. Goode, Sweet Dreams, Sarah, shows a determined young black woman in pursuit of a dream. In lyrical language, Kirkfield describes Sarah's childhood as a slave and her dreams for something better: "A husband, A family, A job that she loved." Kirkfield continues to tell how Sarah achieved all three by moving to Chicago after emancipation, marrying Archibald Goode, starting a family, and opening her own furniture store. That might have been enough, but Sarah was skilled with people and with woodworking tools. She found a need--to make room for more beds in small apartments--and set to work. The furniture in her story wouldn't work: "Too boxy! Too bulky! Too big!" But she had an idea that led to Sarah Goode being the first black woman to hold a patent. Kirkfield shows Sarah's failed attempts at creating a cabinet bed (a forerunner of the Murphy bed) and the denial of her first patent application. After those trials, her patent acceptance and sale of her cabinet beds were a sweet dream come true. The illustrations by Chris Ewald show Sarah in action and emotion, helping readers to feel the depth of her dreams and understand the difficulties of her challenges.The back matter fills in more of the story with an Author's Note, an explanation of what a patent is, and a timeline of Sarah's life.

Both books are good for the older picture book reader through adults because of  their empowering facts and emphasis on persistence in pursuing one's dreams.

And stay tuned! Next week, I get to host David L. Harrison and tell you about his forthcoming book as part of his book launch blog tour!
Posted by Jane Heitman Healy at 10:53 AM 4 comments: