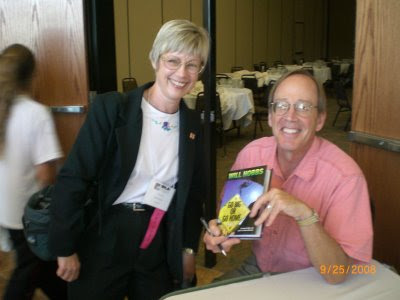 Previous posts attest to my fondness for South Dakota's Black Hills. Young adult author Will Hobbs found it such a compelling place he set his latest novel, Go Big or Go Home, in Hill City. It's an exciting story about a teenage boy, Brady, who has a meteorite crash right into his bed! A consultation with a scientist at the Hill City museum reveals that the meteorite originated on Mars and may contain dormant life forms. The title is taken from extreme sports, and both of the main characters get into some extreme situations. I won't reveal more of the plot except to say that it is a fun read containing astrobiology, geology, astronomy, biology, family & friends, enemies, disease, history, recreation, teen scenes, humor, and more. As usual, Will jam-packs his books with facts in such a subtle way that readers don't know they are learning. Also as usual, he does extensive research, and South Dakota readers appreciate that he got the Black Hills exactly right.

Will and his wife, Jean, live in Durango, Colorado, and I was pleased to meet them several years ago. Our paths still cross from time to time, including this week in Chamberlain at the South Dakota Library Association Conference. It was a special audience for Will, as the librarian at Lead helped inspire the story.

Find out more about Will and his books here.
Posted by Jane Heitman Healy at 8:24 PM 1 comment:

Advice from a Wagonmaster

An historic trail ride was re-enacted this summer to commemorate the 100th birthday of the Ft. Pierre to Deadwood Trail. This trail from prairie to mountains served as a freight-hauling route from 1874 to 1908. Some passengers arrived in Deadwood via this route, too, as stagecoaches clattered across the land.

The trail today is marked with signs, but even without them wagon ruts are visible in the prairie grass along the highway. This summer, a maximum of 300 people per day rode horses or drove wagons in pioneer style to experience the approximately 200-mile trip in a non-motorized way. After 17 days, the wagonmaster and his followers arrived in Deadwood. A participant told me that it was fun, but she was glad to get back to the comforts of home. I'm guessing everyone gained a new respect for the early settlers and appreciated our modern conveniences more than ever. In respect to copyright, I'll direct you here to see pictures.


Before they began their journey, the wagonmaster spoke to the participants and those gathered to send them off. He cautioned them that many things could go wrong. Inconveniences, potential injuries, insects, varmints, and bad weather could befall them. Traveling with a lot of people and animals is not an easy task, and they would get in each other's way at times. "Patience and courtesy," he admonished, would get them through. "Patience and courtesy."

Seems to me that society as a whole could benefit from the wagonmaster's advice and make the world a tad more civil.

For more about the trail and the trail ride, click here.
Posted by Jane Heitman Healy at 6:13 PM No comments: