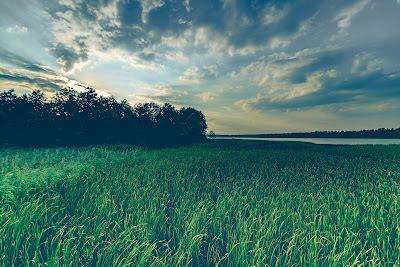 During this time of COVID-19, my library is closed, and I am one of several staff who have been reassigned to Parks (more on that another time), which must be why I think about grass more than usual--mowing, trimming, weeding, and admiring grass.

Carl Sandburg wrote his poem "Grass" and recites it here:


Which brings me to Memorial Day, a day to remember those who gave the ultimate sacrifice for their country. My family has a story that harks back to WWI and the 1918 Spanish Influenza pandemic. My great-uncle, the co-owner of a general store in our hometown, was very popular and highly regarded there. He was drafted into the Army in WWI and sent overseas. As you might expect, the folks back home worried about him and prayed for his safe return. And return he did! Growing up, I heard the story's ending as "and then he caught the Spanish Flu and died." Years later, a relative said that it was actually scarlet fever. Regardless, the result was the same. My great-uncle, who had fought in WWI half a world away returned safely only to die soon after from a disease in 1920. We remember. 
In 1905, George Santayana's famous words, "Those who cannot remember the past are condemned to repeat it" were published in The Life of Reason: Reason in Common Sense. While we vow to remember, time and generations pass, and the grass does its work.

We have work to do, too, to tell the stories so that we can learn from the past and make the world a better place.