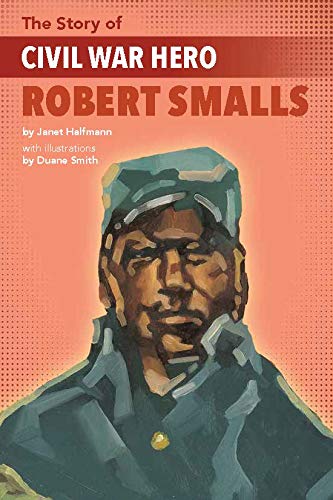 Today, Juneteenth, is the perfect day to introduce you to Robert Smalls. You may already know about his heroism in stealing a Confederate ship, saving enslaved families, and delivering them, the ship, and the four cannons on board to the Union! You may know that he went on to serve in the South Carolina state legislature and United State Congress, fighting and advocating for African American rights throughout his life. I knew none of this until I read Janet Halfmann's book for children, The Story of Civil War Hero Robert Smalls, illustrated by Duane Smith and published by Lee and Low in February.

Halfmann first wrote about Smalls in her 2008 picture book biography, Seven Miles to Freedom. She expanded and updated the information for grades 3-7 in The Story of Civil War Hero Robert Smalls. Keeping her young audience in mind, she begins both books with Robert Smalls' childhood as an enslaved boy, who at age six began service in the master's house. She writes with empathy, precision, and suspense so that readers of all ages can understand what being enslaved means and feel the danger involved in Smalls' daring escape.

The book contains a sidebar that details the Planter, the ship that Smalls steered to freedom. It also has a sidebar about slavery and one about a woman's daring escape. Back matter includes references and other reading guidance for more information.

This book is a great read for all ages. I thank the author for the e-advance copy she sent.

In a time when Confederate symbols and statues are coming down, the statue of Robert Smalls at the Reconstruction Era Monument in Smalls' hometown of Beaufort, SC, deserves to stand tall. "My race needs no special defense, for the past history of them in this country proves them to be the equal of any people. All they need is an equal chance in the battle of life."
-Robert Smalls, from the 1895 constitutional convention

Posted by Jane Heitman Healy at 7:06 AM