William Blake, British artist and poet from 1757-1827, said he talked to the angels from the time he was a youth.  Once he told others that he could "see a tree filled with angels, bright angelic wings bespangling every bough like stars" (Alexander Gilchrist, Life of William Blake: Pictor Ignotus, 2 volumes, London: Macmillan, 1863; enlarged, 1880).

He poured his visions into poetry and art, combining the two into what he called "illuminated writing." The Poetry Foundation describes the process:  "Blake's technique was to produce his text and design on a copper plate with an impervious liquid. The plate was then dipped in acid so that the text and design remained in relief. That plate could be used to print on paper, and the final copy would be then hand colored."

His poems from Songs of Innocence are often anthologized for school students. They may be easy enough to read, but contain layers of meaning.

For this Easter weekend, I'll feature one of those, which happens to be one of my favorites. 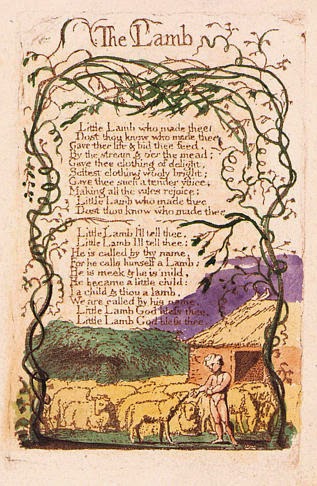 “To him who sits on the throne and to the Lamb    be praise and honor and glory and power,for ever and ever!”
(Revelation 5:13)