Spending Time in the Tropics with Margarita Engle's Books 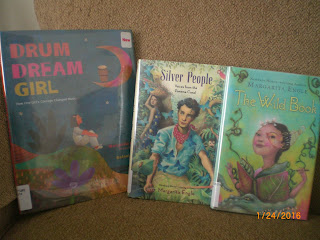 My last post was all about cold. And then it got colder! What's a person to do but think warm thoughts and read award-winning books by Margarita Engle set in warmer climes? So for the past week, I've been dreaming about drumbeats, digging in Panama, and conquering dyslexia--all thanks to Engle's verse novels. Engle's ability to step into another's shoes makes her historical works for young people go straight for readers' hearts. 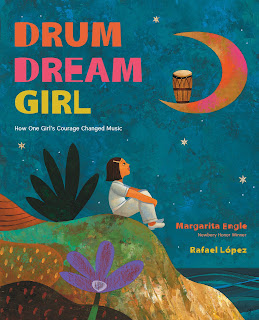 Like most of Engle's work, Drum Dream Girl is based on an historical person, Mila Castro Zaldarriaga, a Chinese-African-Cuban girl who dreamed of playing the drum--an activity reserved for boys & men only. Mila refuses to give up her dream, paving the way for girls and women to be drummers today. Engle uses research and imagination to tell Mila's story, which is beautifully and creatively illustrated by Rafael Lopez.  So beautifully, in fact, that this book won the Pura Belpre Illustrator Award for 2016. The book has won many other awards, too. Get a feel for the book here:


Both the setting and the girl's courage to follow her dream warmed me. 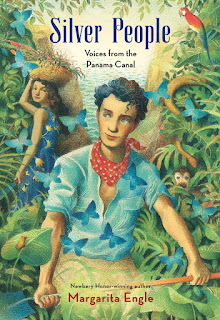 What did you learn in history about the Panama Canal? Probably something about the importance of building the canal to improve trade routes. Maybe a little about malaria. But what would it have been like to be the people who did the work? Engle's verse novel, Silver People, introduces us in alternating poems to Mateo, a young Cuban; Henry, a Jamaican; Anita, a local Panamanian, and others. They soon find out that the work recruiter's promises are false. They--and we-- learn that the world is divided into Gold People (whites, who are paid with gold) and Silver People (people of color who are paid with silver). The Silver People are further divided by the darkness of their skin, with the darkest skinned men doing the hardest, most dangerous work. To make matters worse, the Silver People see the Gold People living and working in comfort, while they struggle. Engle includes the environmental impact on the Panama Canal project by including poems from the forest--the howler monkeys, the sloths, the vipers, and the trees themselves. This book has earned many awards, including the Bank Street Center for Children's Literature 2015 Best Children's Book of the Year. While reading in sub-zero temps, I was sweating with Mateo in the jungle, and hoping he would make it out alive. 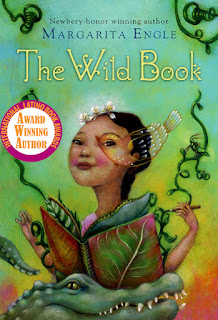 In The Wild Book, we read a fictionalized account of how Engle's grandmother overcame word-blindness, or as we know it today, dyslexia, by writing in a blank book her mother gave her. In a time of Cuban bandits following Cuba's independence from Spain, what Fefa learns helps save her family and their farm. Engle develops Fefa's character well, allowing her to go from an unsure girl to a confident young woman. Fefa and her mother both love poetry, but at first Fefa can only see them as "towers so tall/that I could never/hope/to climb/all the wispy/letters." Later, she flies "to the truth of words" and outs the villian. When things have settled down, she reflects that she has "grown/just a little bit/stronger/and wiser." A testimony to the power of reading and strength of character, The Wild Book has received honors including Kirkus Reviews New & Notable Books for Children, March 2012.

Enjoy these and other books by Margarita Engle and listen to her tell about her writing about Cuba:

Books can warm hearts even on the coldest days! What books warm you?