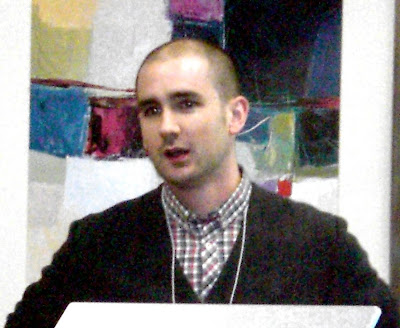 The children of South Dakota have spoken! After reading many great books in the past year, kids in kindergarten through second grade voted Peter Brown's The Fabulous Bouncing Chowder as the Prairie Bud Award winner for 2010. 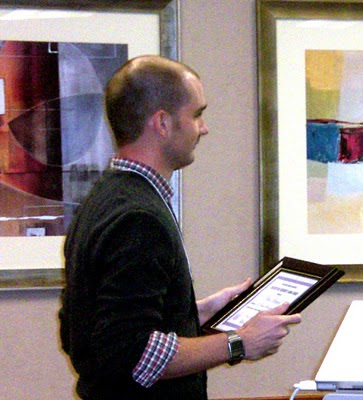 Brown was in Sioux Falls to receive the award at the SD Library Association Conference at the end of September. He graciously offered an impromptu session about his art and work. Growing up in New Jersey, he began writing at an early age. (His first book is shown on his website, and he showed it to us during his talk.) He was encouraged in his artistic pursuits and graduated from the Art Center College of Design in Pasadena, CA. After graduation, he moved to New York City and continued developing his artistic craft and his writing craft.

A young man with a good sense of humor, Brown said that his lucky break came at a New York party where he met several young women, all of whom were in the publishing industry. Yes, his first picture book was published as a result of this meeting, but Brown emphasized that the meeting would have meant nothing if he had not been prepared. He had studied, done the work, and done the networking. He was credible and professional. The time was right, and his career as children's picture book author--and book Flight of the Dodo--were launched!

For Brown, creating the pictures comes easily. He says he labors over each word. He tries to use no unnecessary words, letting the artwork help tell the story rather than merely decorating it.

His two books about Chowder, the bulldog, delighted his young readers so much they are clamoring for more, but Brown is not sure he will return to Chowder. He showed us slides from his book Children Make Terrible Pets, released this September and destined to be another kid pleaser. 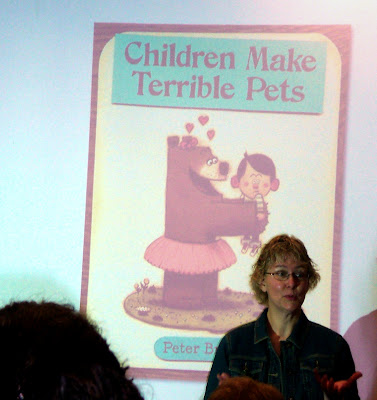 Congratulations, Peter Brown, and thanks for visiting South Dakota!

Hear and see Brown yourself in this five minute interview: