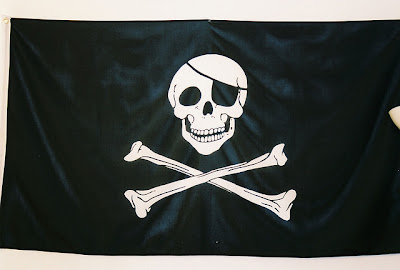 Ahoy, mateys! September 19 is officially International Talk Like a Pirate Day. Don't be a bilge rat! Join in the fun. The Web site has pirate talk in English, German, and Dutch.


Here's a brief lesson from the Pirate Guys themselves:


This link takes you to a site where you can find out your true pirate name. Here's mine: Iron Ann Cash. Description: A pirate's life isn't easy; it takes a tough person. That's okay with you, though, since you are a tough person. You're musical, and you've got a certain style if not flair. You'll do just fine.
Is your pirate name as accurate as mine? Arrrrr!


Shiver me timbers! Here's Mike Mennard's "Pirates." Learn why it's hard to be a pirate in Nebraska!

And I'll end with a book about a pirate beauty--or was she really a pirate?--The True Confessions of Charlotte Doyle by Avi.

So, get your pirate name, pirate songs, pirate books, and shove off! But first--what are your favorite pirate songs or stories?
Posted by Jane Heitman Healy at 12:49 PM