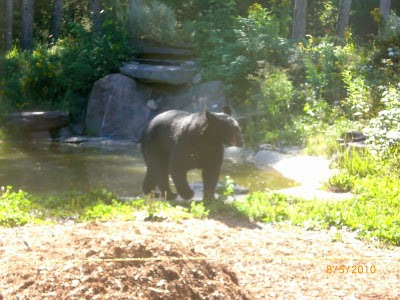 "Time to cool off!" we imagine Teddy saying, as he catches some spray from the waterfall.

We met Teddy (from the observation deck a safe distance and many barriers away) at the North American Bear Center in Ely, Minnesota. The Center offers excellent exhibits to teach us about bears' characteristics and is home to bears Teddy, Lucky, and others that have been raised in captivity.

We learned that bears eat grapes and nuts, as we got to observe feeding time. 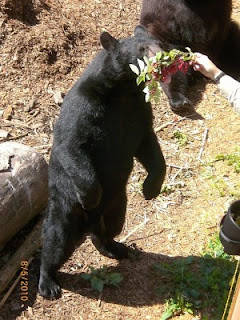 The exhibits told us that bears are generally gentle creatures and had pictures to prove it. Teddy had his mouth around a Center naturalist's face, kind of like a full-head kiss! Below, Teddy sits in the scale. The read-out inside showed his weight at 670 pounds. 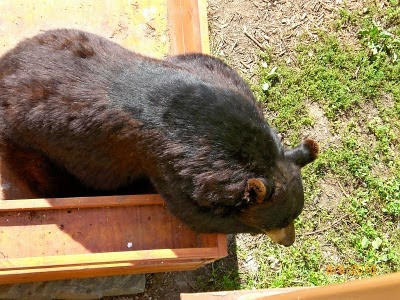 From Yogi to teddies to pandas to grizzlies, people have had a fascination with bears. The Three Bears is a favorite folklore tale. Two of Bill Martin's classic bear stories being re-released, Brown Bear, Brown Bear and Polar Bear, Polar Bear, are children's favorites. Let's not forget Helen Oxenbury's We're Going on a Bear Hunt! Find the book, a willing child, and go bear hunting with this story!

Not all bear tales are for kids, though. Many South Dakotans know the true story of Hugh Glass, a mountain man who was mauled by a grizzly, left for dead by his compadres, and who then crawled 200 miles to the safety of a fort. A fictionalized account by Frederick Manfred, Lord Grizzly, tells the dramatic tale. Nevada Barr writes mysteries set in national parks. Her Blood Lure involves grizzly bear research in Glacier/Waterton Peace Park in Montana.

What bear stories can you tell me? Have you ever had a personal encounter with one?
Posted by Jane Heitman Healy at 5:21 PM