Imagine you are a young man, raised on a farm in South Dakota, USA. Imagine you are sent to countries you have barely heard of to fight during World War II. You train with guys from states that previously meant nothing more to you than an outline on a map. 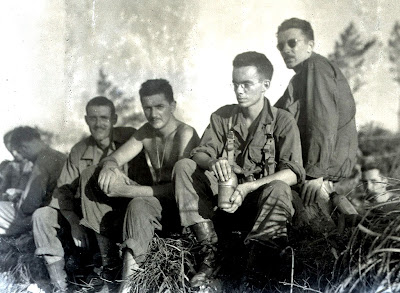 (photo http://www.flickr.com/photos/dok1/1558842435/ Don O'Brien: "Okinawa September 1945, After 58 days on a troopship from France, we landed at Okinawa.The trip took that long because we stayed anchored for 3 weeks at MogMog awaiting orders after VJ Day. This photo was, as I recall, taken on the first day."


You and those guys ship out, and you rely on each other for your lives. Imagine being caught in a battle on a jungle island in the Pacific. Soldiers around you--guys you know--fall dead or injured. You could run to save yourself. Or you could try to help one of your own. What would you do? 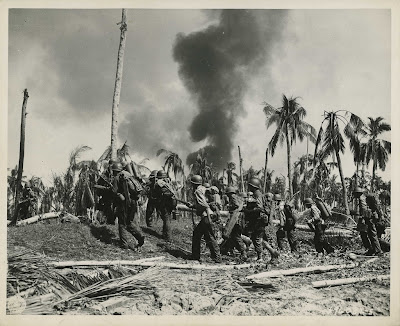 (photo from Otis Archives. World War 2 - combat battle scenes (Pacific theater). A cavalry weapons troop moves from the beach past splintered trees and fires caused by the heavy bombardment preceding their landing on Leyte Island in the Philippines. Selected by Kathleen. http://www.flickr.com/photos/7438870@N04/2088150699/)

My husband's uncle, Howard Johnson, chose to help a fallen comrade, and in doing so, sustained injury himself. His wartime service earned him a Purple Heart, Good Conduct Medal, Bronze Service Arrowhead, and the Philippine Liberation Ribbon.

When Howard's family went through his things after his death this summer, they found and displayed his Army uniform. In the pocket, all these years later, was his ticket home. 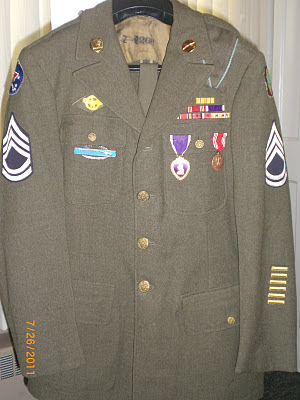 Howard went on to work, marry, and enjoy the freedoms he helped earn, as so many veterans have. Across the United States are men and women who served in the Armed Forces with the desire to preserve that freedom and to come home to experience it. On Veteran's Day, November 11, we honor them and remember those who did not come home.

Thank you, Howard Johnson, and all who have served and who are currently serving in the US Armed Forces.

If you have a veteran's story you'd like to tell, please leave it in the comments below.