Always Give Thanks: Thanku: Poems of Gratitude 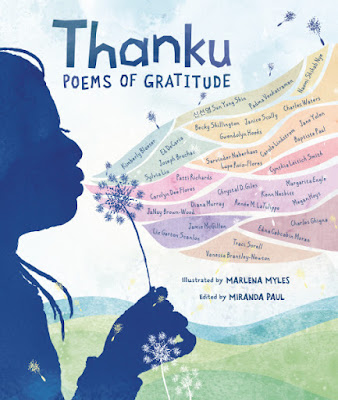 Today in the United States, we celebrate Thanksgiving, but giving thanks is for every day, not just one.

"....We need to give thanks
every dawn
for the gifts of life,
for each breath drawn...."

So opens Thanku: Poems of Gratitude, with "Giving Thanks" by Joseph Bruchac.

This book, edited by Miranda Paul, includes poems by top children's poets who give thanks for creation, birds, sky, stars, the number zero, friends, puppies, and more. Each poem is written in a different form, defined in the back matter for readers who want to know more or try their own. You have probably heard of quatrains, but how about a fib?

Editor Paul and publisher Millbrook Press sought and got diversity among poets, formats, and topics. The book, released in September is winning awards and being named to "Best of 2019" lists.

I was especially thrilled to meet illustrator Marlena Myles at this fall's Northern Plains Indian Art Market! We were able to chat for some time about her part in the book's creation. She said that the publisher let her voice opinions and design spreads the way she wanted them, though this was sometimes challenging because of the disparate topics juxtaposed on either side of the page. She kept her primary audience--kids--in mind as she worked.

The story of the page on the right below, illustrating "Nothing to Be Grateful For" by Padma Venkatraman, was amazing to me. Myles said she translated the poem, about the number zero, into binary code! 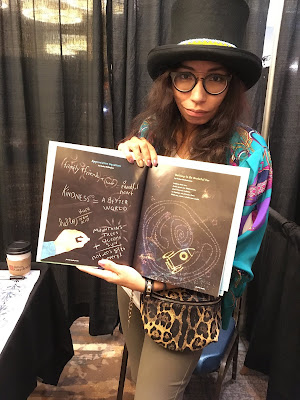 This is an extraordinary book about gratitude for ordinary things. The details will keep me coming back to it over and over.

I am thankful for Thanku!

Posted by Jane Heitman Healy at 6:12 PM No comments: Links to this post

What Really IS Happily Ever After? A Review of STEPSISTER by Jennifer Donnelly 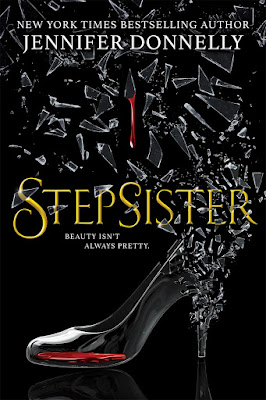 Halloween week seems an appropriate time to review Stepsister by Jennifer Donnelly. I got this book from the library after it was recommended by a local high school librarian as the best thing she had read all summer (and she reads a LOT).  Think back to the Cinderella story you know. This ain’t it.
The key is on the front and back covers—“Beauty isn’t always pretty”(front), and “Don’t just fracture the fairy tale. Shatter it" (back).
Donnelly has rewritten the Cinderella story with a focus on the ugly stepsisters. The story begins with the two stepsisters, Isabelle and Octavia, each cutting off part of her foot so that it would fit the glass slipper. As in the original tale, that ploy doesn’t work, and Ella, the good, beautiful, cast-aside stepsister, gets the prince. She rides off in his carriage and lives happily ever after—or does she? As we read, we learn more about the motives of each stepsister and other characters, which furthers our understanding of their personalities.
This story can be read on different levels. To heighten the fantasy, Donnelly has Fate, Chance, and Isabelle’s free will duking it out. With help and a challenge from a shift-shaping godmother, Isabelle learns what her true heart’s desire is. She grows from having the narrow view of a female’s role imposed by her mother, making her vain and selfish, to becoming her country’s heroine. Yes, this is a story of female empowerment, suitable for older preteens and up.
Turning the traditional tale on its head, readers ponder:  What is beauty? What is “a female role” in society? How do we respond to jealousy—our own and that of others? What is strength? How can we work together with people we may not like?
The writing is excellent and full of surprises. One of my favorite passages demonstrates why you would want to keep reading:

“Isabelle put her weapon down and her hands up. A sword was no match for a gun. Chest heaving, she stood, then slowly turned around, certain that another deserter had come up behind her and was pointing the pistol straight at her head.
Or maybe a burglar. A brigand. A cold-blooded highwayman.
Never, for a second, did she expect to see a monkey wearing pearls.” (p. 89)

When I researched the Cinderella story for my book for teachers and librarians, Once Upon a Time, I learned that this is considered a universal story. That means that instead of originating in one place and traveling to another, this story has versions that have originated in cultures around the world. 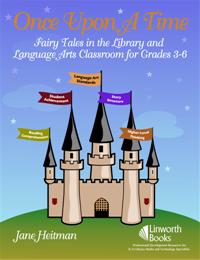 A couple of other good sources for fairy tale information are The Classic Fairy Tales by Iona and Peter Opie and the Sur la Lune website, as well as the work of Maria Tatar and Jack Zipes.

Posted by Jane Heitman Healy at 1:54 PM No comments: Links to this post 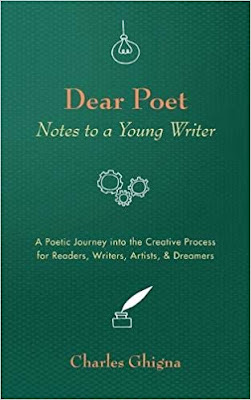 When I received a digital copy of Charles Ghigna’s Dear Poet courtesy of the publisher, I read it. I immediately reread it. And then I read it again. I ordered a print copy, so that I can more easily refer to it, mark it, and highlight it. Just before setting down these words, I read it. And I immediately reread it. It’s that good.
Dedicated to his artist son, Chip, and writer wife, Debra, Ghigna wrote this slim book of poems with them in mind. He also looked back and wrote the advice he wished he'd received as a young poet.
Taken together, the title and subtitle, Dear Poet: Notes to a Young Writer, may seem exclusive to those involved with poetry. The rest of the title opens up the book’s true purpose and includes a larger audience: A Poetic Journey into the Creative Process for Readers, Writers, Artists, & Dreamers.
This is a book of wisdom for creatives and persons following their own dreams at any age. Replace the word “poem” with your dream, and the advice will apply to you. I read the entire fifty-six page book in twenty minutes. I will absorb it over the course of the rest of my life.
Ghigna includes poems about recognizing limits, dealing with difficulties, keeping hope, and getting out of one's own way. Using metaphor and simile, he defines the undefinable—style, voice, inspiration, and poetry itself. You will find an echo, a firefly, a sunset, and other ordinary things to guide, encourage, and give purpose to your creative journey.

I highly recommend buying this wisdom book and keeping it handy to read and re-read to soak in inspiration.

A look back: I reviewed Charles Ghigna's book for children, First Times, here.

Posted by Jane Heitman Healy at 1:21 PM 4 comments: Links to this post

Oceanly, an "I Love You" Book 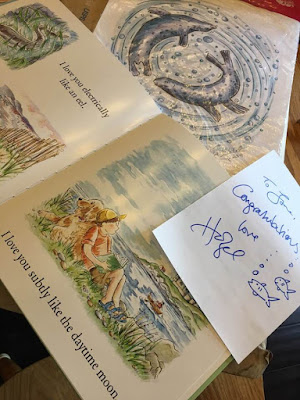 It’s here! Oceanly by Lynn Parrish Sutton, illustrated by the very generous Hazel Mitchell, from whom I won the book and who included the swimming seals artwork as a bonus.

It's been awhile since I've written here. Now that fall is near, I'm back to business. I'd like to introduce you to a "love"ly new book. Here's my review from Goodreads:

Oceanly by Lynn Parrish Sutton
My rating: 5 of 5 stars

Here's a beautiful addition to the canon of "I love you" children's picture books, which make for great gift-giving, lap-reading, and bedtime reading. Author Lynn Parris Sutton's creative, rhyming text begins each sentence with "I love you" followed by an adverb followed by something ocean-related. For example, "I love you splashily like the spout of a whale./I love you flexibly like a seahorse's tail." Illustrator Hazel Mitchell's illustrations complete the story, depicting diverse people and accurate drawings of all things oceanly. I especially like the "joyful" seals whirling in the water, and the boy sitting by the ocean, holding a book while he leans on his golden retriever. This "I love you" book extends beyond the very young child, as it offers opportunities for learning about the ocean environment and fun with language.

I'm thankful to Hazel Mitchell, from whom I won a complimentary copy.


View all my reviews

I Love You Oceanly is available from online bookstores and from your local Usborne Books and More representative.

Posted by Jane Heitman Healy at 5:03 PM No comments: Links to this post


National Library Week officially ended yesterday, but let's keep celebrating, shall we? A friend recommended this marvelous book, an excellent read any time. A step back in history, a tribute to the woman who started the first bookmobile in the U.S., and a reminder of how far we've come, this picture book biography of Mary Lemist Titcomb is great for all ages.

The theme throughout is stated clearly on the first page--"Mary never gave up." One of Mary's sayings was "The happy person is the person who does something." And so, she did! In a time when women had little power or influence, she faced obstacles galore, but made her dream a reality that became a beloved institution.

The book's finely focused details are enhanced by historic photos and images of documents. The book concludes with photos of "Washington County Bookmobiles Through the Years."

The Author's Note adds more layers to this interesting story. Sharlee Glenn found Titcomb's unmarked grave and raised money for a marker for Titcomb and her sister, Lydia.

I have to think that Mary would be happy that Sharlee "did something" about the something that Mary did. 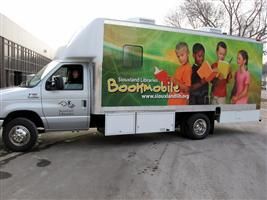 Our library still runs a robust bookmobile route. If you have bookmobile memories, please leave them in the comments.

Posted by Jane Heitman Healy at 9:06 PM 6 comments: Links to this post

"Lord, what fools these mortals be!"
~A Midsummer Night's Dream, William Shakespeare

Even though it's April Fool's Day, I'm not fooling that Pop-up Shakespeare: Every Play and Poem in Pop-up 3D is an amazing feat of literature and paper engineering!

I won my copy on the Teacher Dance blog, courtesy of Candlewick Press. It lives up to its title and subtitle, truly including every. single. play. and. poem! And takes so much less shelf space than my old Riverside Shakespeare!


Reed Martin & Austin Tickenor of The Reduced Shakespeare Company help us understand the whole of Shakespeare with lift-the-flap features and pop-up pages for  Shakespeare's background, the Histories, Tragedies, Comedies, and Poetry. It includes play synopses, quotations, explanations, and humor. The book design itself was engineered by Jennie Maizels. 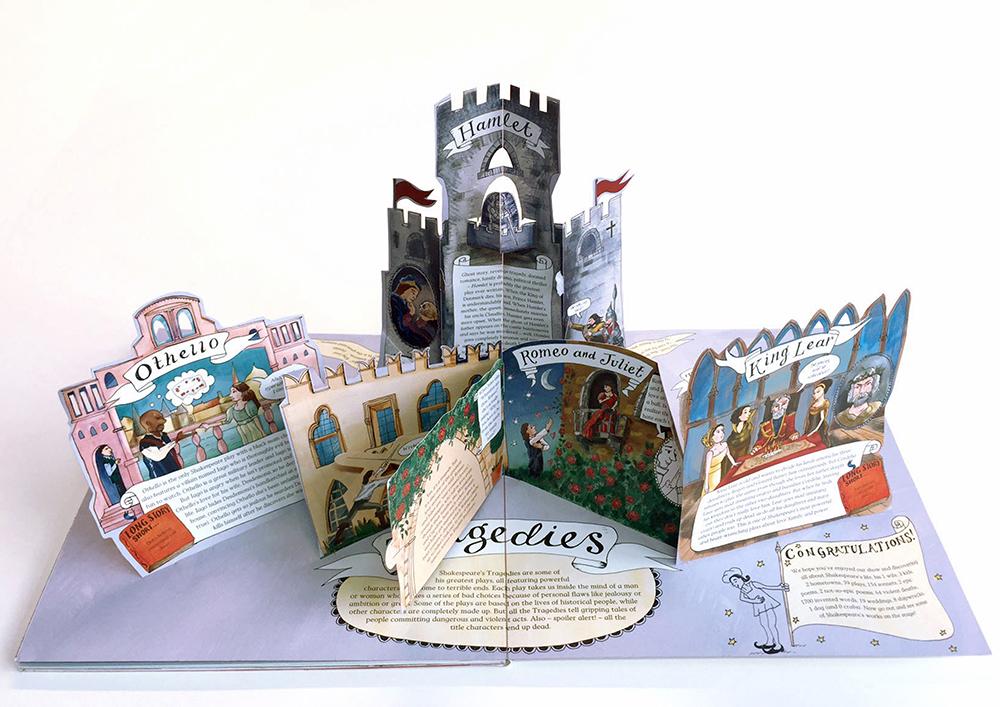 When you are done reading this side, turn it around and read the back!

This book makes Shakespeare fun for those who are afraid of him. For those who already love him, this book enriches that love.

If it's been awhile since you've read any Shakespeare, maybe you should "Brush Up."

And for a more serious look, try this site from The Poetry Foundation.

Happy National Poetry Month!
Posted by Jane Heitman Healy at 9:11 AM 2 comments: Links to this post