Your Mother Was Right!

"Get a good night's sleep!"
"Go outside and play."
"Pay attention!"

These orders have come from many a parent's lips. It turns out they were right, though they might not have known why. Getting a good night's sleep, getting plenty of exercise, and paying attention are three ways to improve your brain power! 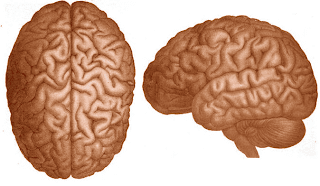 John Medina, a developmental molecular biologist, studies the brain as it relates to cognitive abilities and is the author of Brain Rules: 12 Principles for Surviving and Thriving at Work, Home, and School.

Dr. Medina has learned that many office and school environments are designed in direct opposition to how brains best function and learn. Cubicalization hinders creativity and productivity. Sitting in rows in desks dulls the senses.

To see all 12 principles and learn more about how our brains work, see the Brain Rules website. His book expands on the concepts introduced on his website.

How can you change your habits or environment to increase your brain power?

"Get a good night's sleep!"
"Go outside and play."
"Pay attention!"
--And thank your mother!
Posted by Jane Heitman Healy at 12:19 PM No comments: 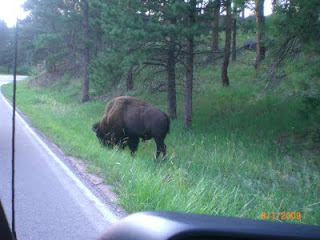 Custer State Park, in South Dakota's Black Hills, is home to a managed wild buffalo herd of approximately 1,500 head. Rounding a bend just off the Wildlife Loop, we saw this bull grazing.

Once these creatures roamed the plains by the hundreds of thousands. From 1800-1900, commercial hunting took its toll until the herds were nearly gone. Fortunately, a few men had foresight to save and raise some calves from the wild herds. Their descendents live in Custer State Park today.

Also known as American bison, these animals can run 35 mph and can jump 6 feet in the air from a dead stop. Their strong legs and massive skulls are weapons against predators.

Our vehicle was so close we could hear the bull rip the grass from the ground and chew it. I could have reached out and touched him, but I knew better! 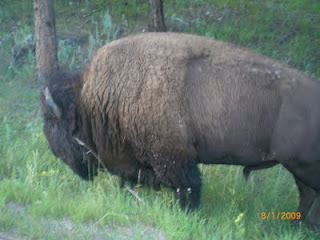 The flower-fed buffaloes of the spring
In the days of long ago,
Ranged where the locomotives sing
And the prarie flowers lie low:
The tossing, blooming, perfumed grass
Is swept away by wheat,
Wheels and wheels and wheels spin by
In the spring that still is sweet.
But the flower-fed buffaloes of the spring
Left us long ago,
They gore no more, they bellow no more
They trundle around the hills no more: --
With the Blackfeet lying low,
With the Pawnee lying low,
Lying low.

Lindsay was known as a "singing poet." He performed his poems, chanting, percussing, emoting, inflecting, and infecting his listeners with sound. Hear the regret in his voice as he gives tribute to this mammoth of the plains by clicking on the poem's title here.

At Custer State Park, the buffalo are still flower-fed and bellowing. I think Lindsay would be pleased.
Posted by Jane Heitman Healy at 9:49 PM 3 comments: